So, the dust has settled from Learning Technologies 2013. What a completely manic two days! I’m not sure how many years I’ve been doing this but it seems like a lot, and I never tire of it. I was looking forward to it for weeks and it didn’t fail to deliver. There were a number of highlights for me.

I did a presentation in one of the exhibition theatres on Tuesday: “What does your next LMS look like?” It was the first time I have presented at LT despite many years of attendance and the theatre was absolutely rammed which was great.

Image: My “What does your next LMS look like?” session on Tuesday morning

I started off by talking about Plato, an LMS with a fairly standard feature set that you could see on pretty much most booths today, but with some nice touches like games based learning tools. I used Plato as example because the platform was actually built in 1960, and it served to illustrate that in 50 years not all that much has changed in the LMS world with regards to feature sets.

However, what has changed is that there are now over 500 LMS products to choose from. My presentation focused on navigating your way through this confusing market if you are an LMS buyer. I showed a range of possibilities for new, modern tools like Curatr and Docebo, custom platforms we have built, and Epic’s proof of concept work on a Tin Can API learning record store.

I had a steady stream of positive feedback over the two days about the presentation which I was really pleased about, it seemed to have hit the spot for a lot of the attendees who appreciated the overview of the options available to them and the range of product showcases. It also sparked a lot of discussion about our Tin Can Learning Record Store mockups and this turned out to be the one of the most popular walkthroughs I was showing people on the stand.

Catching up with old pals

I’ve been working in e-learning since 1996 and one of the defining characteristics of our industry is the close knit nature of it. So it was great to catch up with ex-colleagues on the Line, Brightwave, Kineo and Kenexa stands and to catch up with old clients from previous jobs and ex-colleagues who were visiting the exhibition. I also got a real sense of the same type of social circle among the LMS vendors too, as I had good conversations with Successfactors, Cornerstone and NetDimensions and the folks on those stands all seemed to have worked for each other at some point too. It seems that whichever part of the learning technologies industry you work in,  this friendly and close-knit social side is apparent. I like that a lot and it was really nice having a catch up with everyone.

On day one I got to have a good look around the exhibition floor. I didn’t make it into the LAS hall unfortunately but the LT hall was impressive. There weren’t a great deal of standout products for me, however a few caught my eye.

The Redsource product won best product at the Elearning Age awards, it is a mobile app store for the enterprise, and looks really impressive, so I got to have a closer look at that.

I was also really pleased to be invited by Brightwave to view a demo of their new Tessello product. We are competitors of Brightwave but they had been at my presentation on Tuesday and had some Tin Can API and Social elements in their new platform that crossed over with areas I was covering. So they invited me to have a look. It was good to swap notes and see their product in action, it has a nice Windows 8 tiles interface and looks the part, a very visual learning platform which sits firmly in amongst the new breed of platform that I had been talking about. I was really pleased that one of our competitors took the initiative and extended an invite like this. You never know what might come out of these conversations so it’s always worth sharing openly. It’s one of the reasons we took our Tin Can LRS product mock ups to the show and put them in front of a large audience and invited feedback, rather than developing behind closed doors. We need more sharing like this!

It was good also to talk to the Panopto folks. We get asked about video streaming within the LMS quite a lot and it’s rarely built in to LMS products. Panopto  have a really good solution which I’m definitely going to follow up on.

The Epic stand was a new design this year. It featured a large video screen showcasing some of our projects and how they are used in the workplace. It was a real attention grabber and a talking point for many people. We also had Alessio and Katia from Docebo with us, having just announced our partnership, and they had travelled  over from Italy for the occasion. Our other international arrivals were Richard and Paulo from Epic Brasil, it was great to catch up with them (they have Moodle work like you wouldn’t believe, there is huge demand in Brazil).

On day two I was on solid stand duty the whole day. I was there as the Learning Platforms guy so the whole team were directing people towards me when it became apparent what their need was. And the was a LOT of need, so I had a constant stream of people all day interested Moodle, Docebo, Tin Can and Sharepoint. It was bloody hard work and I had sore feet, sore legs and sore voice at the end of it, but met some really interesting people and have a lot of follow up work to do off the back of it all.

Image: Epic stand just prior to opening on Wednesday morning

Tin Can API was on a lot peoples’ lips. During my presentation I showed some mockups of a Learning Record Store we have designed and we had a lot of followup conversations on the stand about this.

Our LRS mockup included an analytics screen, shown below, which maps course completion data to sales performance data in order to establish correlations between the two. The example was fairly simplistic and has been developed for a retail customer hence the sales focus, but illustrated a good use case for measuring the impact of workplace learning on performance. 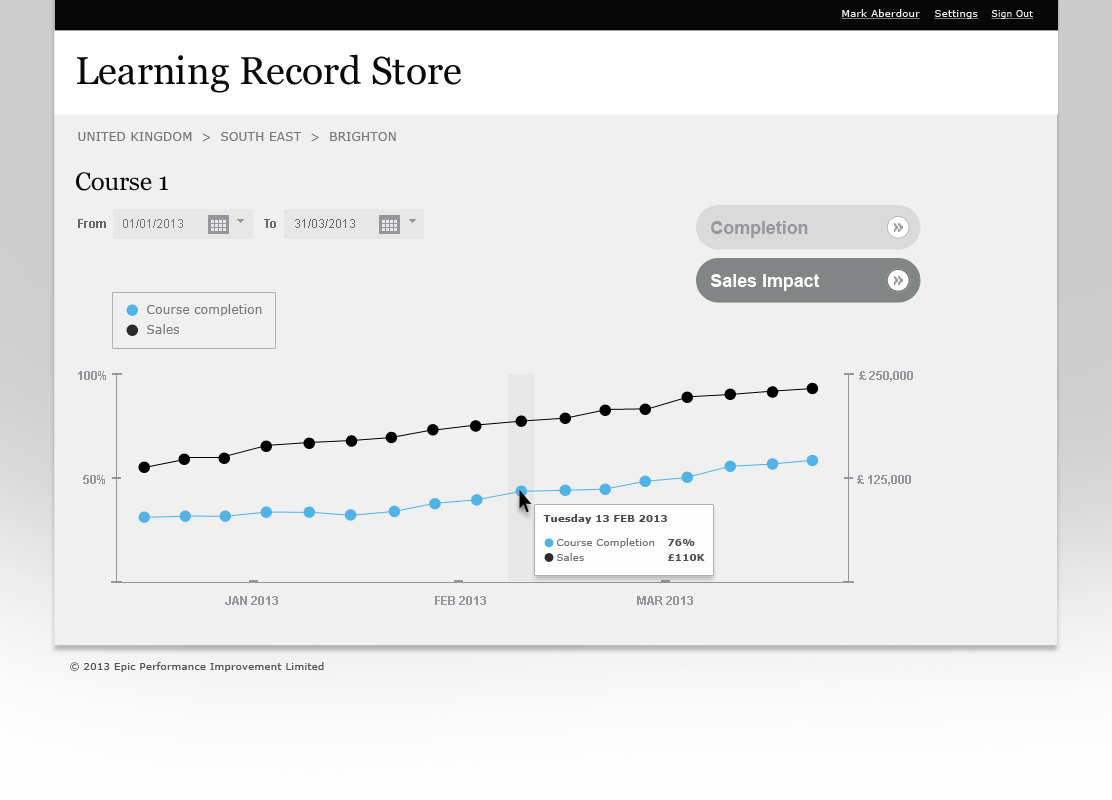 The learner interface included the screen below which shows a ‘personal data locker’ view. An activity stream displays Tin Can statements being pulled in from an e-learning course, event booking system and a sales CRM system. The learner can also export their feed, connect up to another LRS or manually add a learning activity. 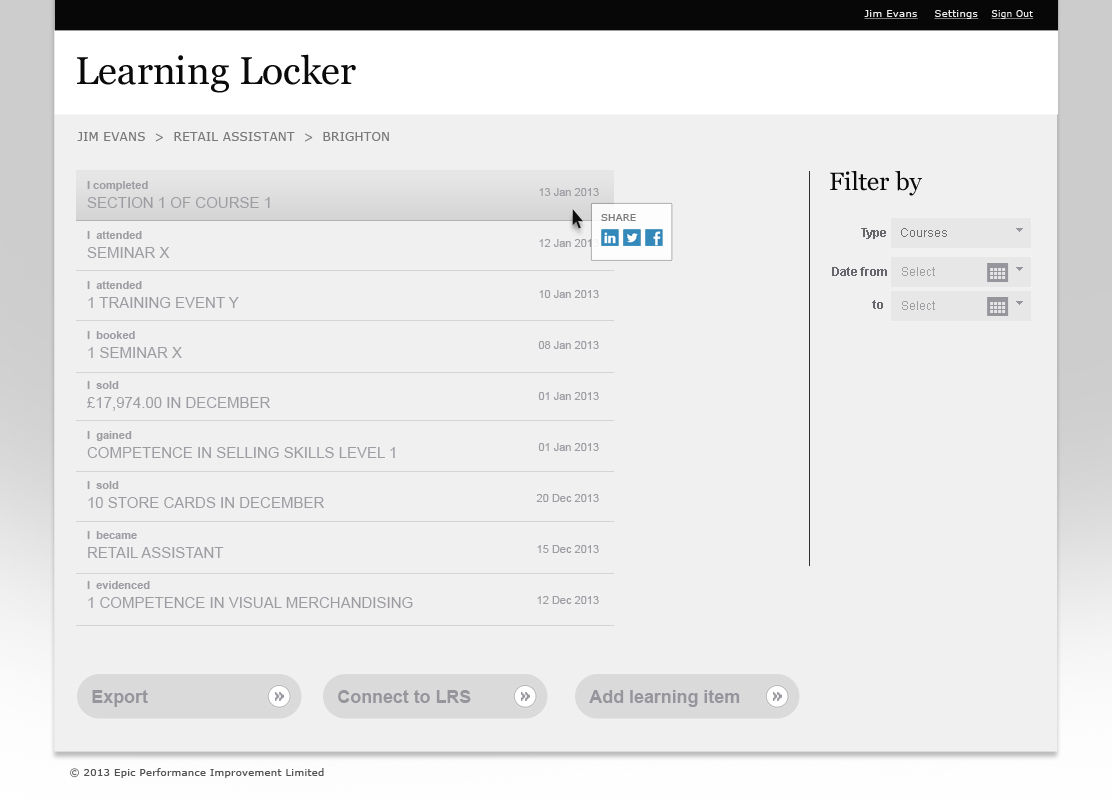 We had some great feedback on the full series of mockups, including a visit from Rustici’s Tim Martin which was really useful. These still need some thought and development but the conversations we had gave us great insight into customers’ needs from this type of system so we will now be able to reflect on this and rework the mockups as needed, prior to implementing a working prototype. I will keep blogging on that as it progresses as we are keen to keep the feedback coming and participate with the Tin Can API community on this.

Travel was my only downside of the whole event. Olympia is frankly a right shit to get to! It’s on a crappy and unpredictable tube line from Victoria and while the overground from Clapham Junction is pretty regular it’s horrendously overcrowded. Am not sure what it’s like heading in from other directions but from the South it’s a truly nasty experience which left a bit of a sour taste.

What an awesome job the organisers did! I didn’t have much time to participate in the Twitter backchannel which was a shame, and I didn’t make it up to the conference either which I had hoped to do. But client meetings and stand duty were my main purpose for being there so these took precedent. And I had a fantastic time, as ever.

The sales team reckoned the quality of the visitors was higher than previous years, which means we have some very busy weeks ahead responding to all the leads and following things up. So time to get our heads down on that now. In fact we have so much to follow up on that I had to cancel my trip to BETT which clashed in the same week. That is a shame, but I guess it’s a good problem to have so I’m not moaning about it. I just wish both shows weren’t in the same week!

So it was one to remember, again. I’m looking forward to more of the same next year. Next stop for me though, is MoodleMoot in Dublin, so maybe see some of you there.