So, it’s been nearly six months since my last blog post and it’s no coincidence that this post announces the impending arrival of my book! What little time has been left over from work and family life over much of past year has been spent hunched over a laptop late at night and taking numerous Moodle screenshots on my phone and tablet, all in aid of an upcoming Packt Publishing book, Moodle for Mobile Learning.

It’s a huge relief to get to the point where I can announce the book, not least because now that it is complete, I can finally move on! There is so much stuff I’ve been waiting to start, not to mention ideas for blog posts to write, that has been put on hold for 10 months. Having never done this book malarkey before, I had no idea what to expect of the process. The original schedule went out the window and there were points when I couldn’t even look at the thing, not to mention a soul destroying realisation that a complete restructure of the book was needed as I neared the end of the first draft. But then in June the reviewers’ feedback started to filter through and their positive comments lifted my spirits, which made the chapter revision process much more enjoyable. To top off the endless fun and games, Moodle 2.5 was released with lots of user interface changes which required me to retake hundreds of screenshots! So it’s been quite a journey, but one which has given me a much deeper understanding of Moodle as a whole, especially some features that I was previously less familiar with, and I am already benefiting greatly from that in my work.

I’m also pleased to have got to this point because it represents my journey over the past two years with Epic. When I rejoined the company in 2011 it was with a view to building up the platforms side of the business, with a very clear understanding that mobile would be at the forefront of everything we would do. But I had practically no mobile experience to talk of at that point, having just spent three years at a company where mobile was simply not on the agenda. Epic on the other hand was all about mobile. They had invested considerably in building the first mobile learning authoring tool and opened an office in Brazil which was going mobile crazy (they hardly ever sell desktop learning there, the country’s infrastructure skipped the 20th century desktop computing infrastructure and went straight to wireless and mobile). So I had a heck of a lot of learning to do, and fast!

One year on and I got a surprise approach from Packt Publishing who saw that the worlds of mobile and Moodle were coming together. After reviewing proposals from a number of authors, they gave me the job. While working on the book I got involved with a team building an exciting new theme for Moodle called Bootstrap, particularly in testing the theme on different devices, which was great fun to be involved with. That work was integrated into Moodle 2.5 core as the ‘Clean’ theme, and I’m really proud to have been involved in that project and process in some small way. Previously I had only really dabbled in the Moodle plug-ins community, but working with the Bootstrap team and on the Clean integration gave me a great insight into the inner workings of Moodle core development, which intrigued, frustrated and excited me in equal measure!

So, this is the culmination of all those efforts: Moodle for Mobile Learning. I really hope you enjoy it and that it helps you in some way to implement or improve your mobile learning initiative. I’d love to hear your feedback too of course, either privately by email or publicly on this blog. Happy Mobile Moodling!

(Note: the book is pre-order only right now and should be on Amazon, Barnes and Noble and Safari Books Online in the next week or so.) 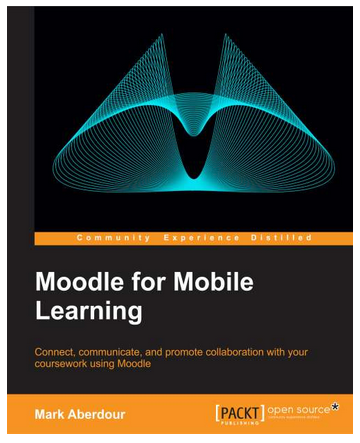 3 Replies to “Drafts, restructures and endless revisions – a book is born!”