A few times in recent months I’ve had a new MOOC term pass through my Twitter feed.  We haven’t had a new MOOC spin-off acronym for a good 6 months. I don’t know what’s happened to the edtech marketers, maybe they’ve been off on holiday on their new yachts spending all those edtech venture capital billions. Anyway, after a quiet start to 2014, we finally have a new buzzword to get excited about: VOOCs. Yay! 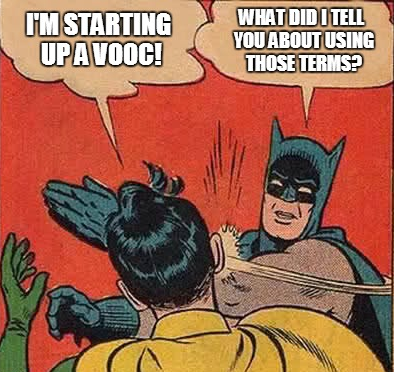 As the term started gracing my news feeds more often, I even clicked it once, and saw my old boss Donald Clark staring back at me. But it was only today that I really sat up and took notice, accompanied as it was by a curious little symbol.

After a long list of educational institutions and thinkers have graced us with MOOC, xMOOC, cMOOC, BOOC, SPOC, DOCC, SMOC and SOOC (I kid you not, see the timeline below…) Virtual College appear to be the first organisation actually mad enough to trademark one of these terms! It turns out the trademark was granted back in November 2013.

Now I understand why they might want to do it, but I can’t believe they actually did it.  According to the UK Intellectual Property Office, trademarks are supposed to distinguish and protect your goods and services in the marketplace. So by definition this would imply that whenever you see any organisation publicising a VOOC (and believe me, we’re in for a whole LOAD of VOOC marketing this year), it should be expected that Virtual College must be involved in that course. That’s obviously plain crazy. The term VOOC is just a natural extension of the “OOC” marketing craze and could not remotely be considered a term that would identify a course as being distinctively associated with any particular institution (even the one that came up with the term). You certainly don’t think of Stanford whenever you see a MOOC advertised, but they have forged a great reputation as the ones who started it all off. And that reputation should be enough in itself. Why try and trademark the term? It kind of goes against the ‘Open’ bit too, if one institution is going to trademark it and keep it for themselves.

I guess this trademark is the logical conclusion of a long line of “OOC” terms stretching waaay back to the original MOOC. I blame Stanfard for starting all this craziness:

I do sometimes wish I worked in marketing, it must be such fun coming up with this stuff!  Where will it all end?! And will the trademark be enforced? Time will tell…

One Reply to “Virtual College trademarks the term VOOC”