December sees the release of Moodle 2.2 which is now under code freeze and being put through the rigours of the Moodle QA process to iron out those last niggling issues prior to official launch. The beta is already available on the Moodle Downloads page and the team are encouraging people to download and test it and feed back any issues found.

The beta release is also a good opportunity to have a play around with the new features. These can be broadly split into end-user and developer features. While much of the fanfare has been around end-user features in the various previews that have been blogged to date, there are significant code-level changes taking place under the hood in Moodle 2.2 which will also have far-reaching effects. Of particular note are some major improvements in mobile support; while Moodle 2.1 and its associated iOS App laid down a lot of mobile groundwork, the mobile capabilities of Moodle 2.2 should help make Moodle a real contender in the mobile LMS space. 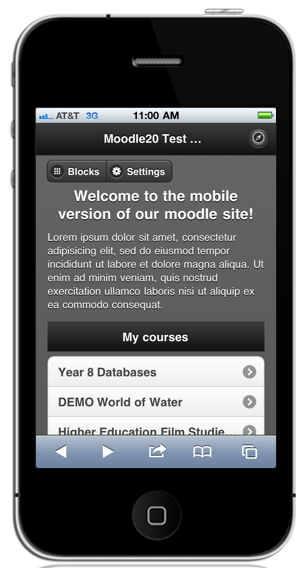 Moodle 2.2 ships for the first time with a smartphone-friendly theme called MyMobile. This can be set either as the site’s primary theme or as the default theme for mobiles. This theme by John Stabinger has been around a while but makes it into Moodle core so congratulations to John on this achievement! This is a great way to use Moodle’s functionality from a mobile, a web connection is required of course as this is not a native mobile app, but it more than fills the gap while development on the official Moodle native apps continues.

The new ‘Get Course Contents’ web service is an important new feature that allows developers to pull course activities and contents into external applications. Currently this includes the course structure, forum contents, resources and labels but should be extended to other activities as time goes on.

The big impact of this is for Moodle mobile applications such as the iOS app that was released with Moodle 2.1 which at the time focussed on messaging and communications, but can now include course and content browsing capabilities as well. The new release also includes a range of other more minor Web Service improvements.

I am a huge fan of the Cohorts feature in Moodle 2, it’s a great way to handle batch enrolment onto multiple courses for specific job roles, departments and so on. Moodle 2.2 includes a very welcome amend to the existing ‘bulk user upload’ feature whereby you can now automatically add users to one or more cohorts during the user upload process by adding cohort columns to the CSV file. I had to take a few goes at this to get it working, as I had initially setup my cohorts with a cohort name (the required field) and not a cohort id (an optional field), however the bulk user upload takes the cohort id, so if you enter the name like I did then it will not work. However, I am sure this will be in the documentation once it’s updated for 2.2! There are also a handful of usability improvements to the existing Cohorts functionality.

The education folks within the Moodle community are making a huge buzz over this major new feature. I’m not a teacher so this terminology is a bit lost on me, so I’ll point you to the Wikipedia definition of Rubrics: “A rubric is an assessment tool for communicating expectations of quality. Rubrics support student self-reflection and self-assessment as well as communication between assessor and assessees. A rubric is a set of criteria and standards typically linked to learning objectives that is used to assess or communicate about product, performance, or process tasks.”

The Moodle documentation for this looks pretty complicated but the concept itself is simple: an assignment can be given feedback according to a range of levels for a particular set of criteria. For example, criteria may be ‘Accuracy of language’, ‘Relevance of content’ and ‘Appropriateness of style’. Each criteria may have any number of levels and these can be individually named for each criteria. The teacher then has a grid on which they can mark the assignment by selecting the appropriate box. It’s a really great feature for teachers, and I’d strongly recommend viewing the 4 minute video at http://www.youtube.com/watch?v=KXavtUhDINA&feature=youtu.be if you find the documentation too complex.

This is really significant for developers, for whom custom reports are one of the most common Moodle customisation requests. ‘General reports’ replace all previous report types (with the exception of gradebook reports) and can be implemented in different contexts (e.g. user level) rather than just system and course level as before. They provide a good starting place for building new reports and allow you to replace or remove official reports.

Admin tools are advanced plugins that are intended for site administrators. This is essentially a code cleanup of the /admin directory, the major benefit being that developers creating custom tools for site administrators no longer have to confusingly put these in the Admin Reports menu. It should also make it easier to distribute admin tool plugins among the community and to remove or replace official admin tools.

This one looks really useful. There are already various conditions that can be imposed before a student is allowed to attempt the quiz, such as open and close dates, the time-limit or requiring the student to enter a password before starting. From Moodle 2.2, these rules are implemented as a type of plugin, which means that new access rules can be created without having to make core code changes to the quiz module.

This new feature has the Open University’s fingerprints all over it, and their ‘Honesty Check’ quiz access rule is served up as an example. Honesty Check puts a new option on the quiz settings form which, if the teacher turns it on, displays a statement about plagiarism and cheating to the student which they have to agree to before they are allowed to start the quiz attempt. I’ve worked on a lot of Moodle sites with hacked quiz modules and these create a real maintenance and upgrade headache, so hopefully this amend will help developers to extend the quiz module in a more modular fashion and will facilitate the sharing of such quiz hacks among the community.

The External Tool (IMS-LTI) module is an important new feature for developers. IMS Learning Tools Interoperability (IMS-LTI) is an IMS Specification which provides a standard way of integrating externally-hosted learning applications with learning management systems. Example learning applications could be a chat application or an interactive assessment application. These can then be securely connected to learning management systems in standard ways without having to develop and maintain custom integrations.

The IMS points out the obvious benefits to this such as decreasing custom integration work and associated maintenance overheads, allowing Software-as-a-Service applications integration, allowing application mashups in the LMS and spurring innovation. Thanks again are due to the OU for spearheading this work.

Common Cartridge is an IMS Specification for exchanging learning content between Learning Management Systems – not just individual pieces of e-learning (we have the SCORM standard for that) but whole courses containing assessments, forums, files, etc. The new ‘Common Cartridge Import/Export’ feature allows Moodle 2 to import and export courses in this standard. Thanks for this feature are due to Moodlerooms.

A wealth of bug fixes and minor changes are implemented including:

Finally, a number of developer related improvements that will be of interest to the coders amongst you include:

So that’s the feature wrap-up for Moodle 2.2. The production version will be released in December. It’s good to see that the new six-monthly release cycle appears to be working well. No doubt there will be issues to be ironed out once this hits the wild so as usual we are recommending that our customers wait a few months before upgrading. The release is part of an interesting wider picture within the Moodle community as many organisations are still running Moodle 1.9 so there will be a large number of people looking at this new 2.2 release as their upgrade point from 1.9 rather than from 2.0 or 2.1.

More interestingly, about 70% of new installations are still Moodle 1.9 according to the Moodle Stats page, so it seems the jury is still out on Moodle 2. But with official support for Moodle 1.9 ending in June 2012, time is running out. Hopefully this important new release will convince the wider community that Moodle 2 is now ready for the primetime.